The Back To the Future trilogy offers solid blockbuster entertainment, but it’s a dangerous discussion piece — because the more you think about it, the less it holds up. The characters are paper thin, the plotting is both overly complex and underthought, and the central relationship in the series (between Doc Brown and Marty) starts off making zero sense and never grows or changes from there. It’s kind of crazy, when you think about it, that a trilogy focuses solely on these two characters, yet not a thing has developed between them from the first film’s opening moments to the third film’s conclusion. Zemeckis distracts us with razzle-dazzle and zany hijinks instead.

Back To The Future Part II and Back To The Future Part III take the small screen appeal I noticed in the first film and run with it. These aren’t really movies, but lengthy sitcom episodes. Back To The Future Part II has a clearly episodic structure — the first “episode” takes Doc and Marty to 2015, the second finds them in an dystopian 1985, and the third returns them to 1955 (to repeat the plot of the first movie). There’s no overarching story linking these three settings together into one cohesive film — as in an episodic show, there’s just a familiar villain who keeps popping up to wreak havoc again and again. Even when there are opportunities to deviate from formula — like the addition of Jennifer to the team — Robert Zemeckis and Bob Gale shy away from it, giving Jennifer a bubblehead personality that requires her to essentially be roofied for most of the film.

The middle chapter works best, because that’s when the stakes are highest. Marty finds that, in this alternate reality, his father is dead and his mother is married to tycoon Biff. A stronger film would find more character here, and more drama. It could easily be its own movie. Back To The Future Part II might be better if it were Back To The Future Parts II, III and IV, and each of these inventive scenarios had time to land. But Zemeckis mostly just pays lip service to theme and consequence, and zips on to the next scenario. The film even ends with a teaser for the next sequel, which was already in the can.

Listen to the podcast here or on iTunes.

Back To The Future Part III, on the other hand, feels like an episode in a sitcom you’d describe as, “the one where they go to the Wild West.” There’s nothing inherently wrong with that — it just feels random, like the Old West was chosen by spinning a roulette wheel. The story is generic enough that you could movie it to pretty much any time, and any place. And that’s the gag, this third time around. The same actors pop up as their ancestors, saying the same old lines — they might as well be sitcom catchphrases. (“Did I do that?”) Cue the laugh track. Once again, there’s nothing emotionally at stake for Marty. When he returns home, this adventure will have changed him not one bit. Maybe he’ll be less sensitive to being called a chicken… but since when is that a part of his character, anyway? We’ve never known Marty to get into fights. He’s not a particularly macho character, though Zemeckis seems to want us to remember him that way, now that it’s convenient for the plot.

Back To The Future Part III does offer one nice touch with the inclusion of Mary Steenburgen’s Clara Clayton, the most developed female character in the trilogy. She has a genuinely touching romance with Doc. (Finally! Doc gets a storyline.) The antics go down easy — Part III is a much more consistent film than its predecessor — but by the final scene, Doc has completely thrown the entire series’ premise out the window. The first Back To The Future showed us how delicate certain moments in our lives are, when things that happen by chance end up defining who we are, and who we spend the rest of our lives with. By the end of the third, Doc is carelessly hauling locomotives from the past into the present just for kicks, then sets off to go fuck with fate again. 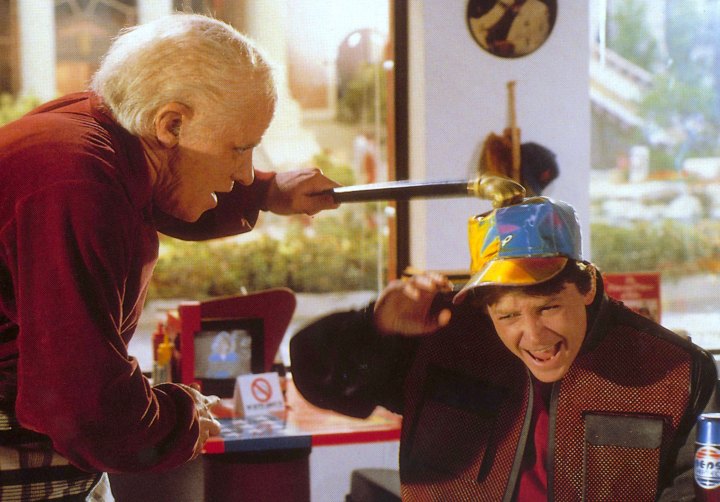 The Back To The Future films are some of the most beloved movies of the 1980s, perhaps the decade’s most nostalgia-drenched blockbusters. But only the first film is at all cinematic — and even that feels like it may be thanks to executive producer Steven Spielberg’s golden touch. What’s missing is the way that every member of Elliot’s family is so fully, believably developed in E.T., or the clear, dire stakes of the early Terminator films. Steven Spielberg and James Cameron are men who know how to make movies — while Zemeckis sizes his franchise for the small screen. The Back To The Future movies aren’t cinematic — they get less and less so with each installment, until the third ends on what seems like the setup of a Doc Brown TV show. Strange, isn’t it? The franchise that leaves itself most open for a comeback is one of few we haven’t seen rebooted.

I don’t think Zemeckis set out to make movies that felt bound for the small screen, but it wasn’t a bad move. Children of the 80s and 90s watched and rewatched them, over and over again. The love for Back To The Future isn’t born out of great moments, like Elliot’s bicycle crossing the moon or the Terminator’s slow-motion stalking of Linda Connor. It’s built out of familiarity, easy comfort, and a story that doesn’t ask anything, really, of its viewer. If sitcom-style hijinks are what you want from your sci-fi comedy, then the Back To The Future sequels are right here for you: “You got it, dude!”