In A Lonely Place: ‘Ad Astra’ & ‘The Lighthouse’

Without mankind’s inclination to push the limits of possibility, we wouldn’t have a number of scientific achievements we benefit from today — and we wouldn’t have a lot of epic movies. In one of 2017’s best films, The Lost City Of Z, James Gray took Charlie Hunnam and Robert Pattinson to the unexplored, inhospitable jungles of Bolivia, searching for a city of legend that may or may not exist. Gray’s follow-up takes another hunky movie star to even more remote, unknown territories — exploring similar themes of obsession with the unknown, the perils of uncharted territories, and father-son doom. And once again, he ruminates on one man’s deep internal conflict between domestic contentment and the inherent male yearning to go where no man has gone before.

Ad Astra stars Brad Pitt as Roy McBride, son of legendary astronaut Clifford McBride (Tommy Lee Jones), who left Earth nearly 30 years ago never to be seen again. Roy has become a lesser legend — also an astronaut, his pulse never rises above 80 BPM. He possesses an almost superhuman level of cool. When powerful electromagnetic pulses from deep space begin to threaten life as we know it on Earth, Roy is sent on a mission to stop them.

But not in the way a space epic hero usually does that sort of thing. Ad Astra looks like a big budget, star-driven space saga on the outside, especially in a handful of rousing action sequences. But at heart, it’s a somber, reflective drama built around big existential ideas. In the breathless opening sequence, Roy plummets from the outer reaches of Earth’s atmosphere all the way back down to terra firma. Beyond being a dizzying, dazzling action set piece, it’s an apt metaphor for what this film is about — man’s inherent urge to reach for the stars, and the gravity-like forces that thwart our best efforts, pulling us back down to solid ground. 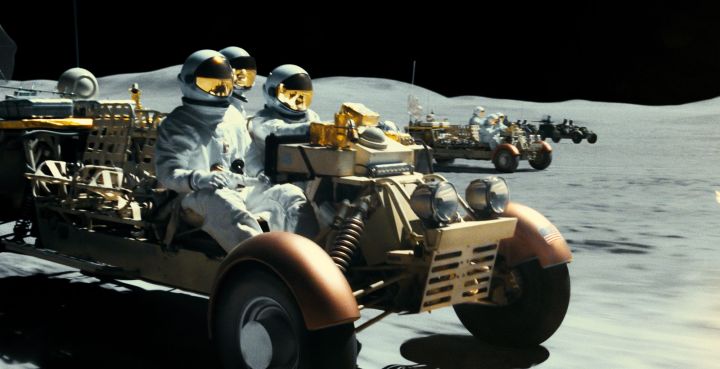 Soon, Roy’s mission takes him to the moon; traveling there has become as mundane as any domestic flight, and the space port he lands in is depressingly familiar, peppered with such worldly dining establishments as Applebees and Subway. But there are more treacherous roads ahead.

Gray shows us only the tiniest glimpses of everyday life on Earth in this near future. The electromagnetic pulses kill tens of thousands across the globe, but we see nothing of the fallout. As more die during the course of Roy’s expedition, the deaths are briefly mourned, then we briskly move on. In the future, Gray suggests, we don’t have the luxury of pausing to reflect on these passings. Perhaps because they happen too often.

Gray takes us from Earth to the moon to Mars all the way to Neptune, each location more alien than the last. Roy encounters moments of peril at every stop, with characters like Colonel Pruitt (Donald Sutherland) and Helen Lantos (Ruth Negga) playing brief but pivotal roles in his journey. In this sense, Ad Astra is episodic, but it’s not so much a journey to the stars as a journey within one man, taking his head out of the clouds and bringing it back down to Earth. Roy is outwardly stoic, a gentler John Wayne type who is astonishingly good under pressure. But voice over narration allows us to access his ruminative interior, which aches with regret.

Roy was abandoned by his father as a teenager. Ever since, he’s had trouble connecting to other people. His marriage to Eve (Liv Tyler) has crumbled; he remains cool and collected even when facing death. Forced to take routine psyche evaluations, Roy passes with flying colors — because he so carefully bottles up his emotions. When he does finally reveal his true feelings, he’s deemed “unfit” to serve. Excellence is isolation; to achieve greatness, one must abandon their most human characteristics. Roy has bought into that mentality all his life. The son suffers the sins of the father, Roy’s voiceover reminds us. Roy suffers them, and repeats them. He loses touch with the only person who truly cares for him, abandoning her for his career.

Many films concern strained relationships between fathers and sons. Ad Astra ups the ante; closure in Roy and Clifford’s estrangement has world-ending stakes. Roy’s superiors believe his father is still alive. He may be responsible for the pulses that put our survival in jeopardy. Roy’s lifelong quest to become his father is put into warp speed as he literally tracks Clifford through space. People are killed along the way, but Roy prioritizes his mission as any good soldier would. As we eventually learn, both father and son are willing to sacrifice just about anything for what they deem to be the greater good. 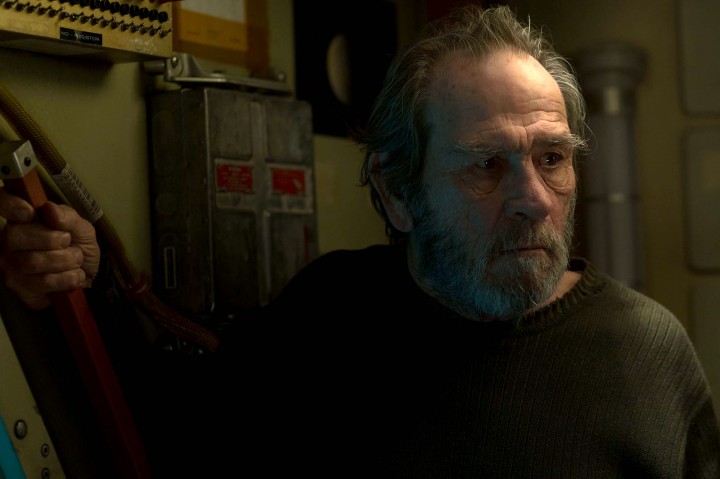 Taken literally, Ad Astra is a rousing romp through our solar system with an implausible but emotionally wrought finale. But it works better as allegory. Clifford McBride is described as a hero. In some ways, he’s more like a god. He’s somewhere out in the heavens when the movie begins; he may or may not be responsible for disastrous global events that threaten to end human life. Clifford, like many fathers, made Roy in his image — and then disappeared. Roy, then, quests to literally meet his maker. On one level, Ad Astra is about a man going into space to seek his father’s mercy. On another, it’s about a man taking to the skies to talk God out of killing us all.

The Clifford character is tough to get a handle on, in part because we learn so little about his time on Earth before his disappearance. When we do finally meet him, we learn that he’s an arrogant, ruthless son of a bitch; he has no trouble playing god with other people’s lives as a means to an end. Ad Astra makes more sense if you view Clifford as a symbol of humankind’s hubris, not a flesh-and-blood human being.

Whether it’s the search for intelligent life amongst the stars or a God in the heavens, man is known for setting family, comfort, and life itself aside in search of a higher power. Clifford went into space seeking communication with extraterrestrial life. That’s a leap of faith, just as if he’d gone seeking the Almighty Himself. Like Gray’s vastly underrated The Lost City Of Z, Ad Astra is about man’s obsession with untenable quests. It doomed Percy Fawcett in Gray’s former film, but here, Roy eventually makes a different choice. The further Roy gets from Earth, the more he’s haunted by memories of his life there. His quest doesn’t bring him closer to God — it just makes him realizes he’d rather be home.

Ad Astra can be read as an atheistic text about realizing there’s nobody out there worth finding, or a timely tale about how not all “great men” are all they’re cracked up to be. With mankind facing a potential extinction, it conjures thoughts of climate change. It’s about killing our heroes — whether that’s a wrathful God or our literal fathers — or, at least, not becoming them. And it ends with the realization that we’re all we got.

In the grand tradition of a ponderous space opera, Gray refashions elements of Interstellar, The Martian, Alien, First Man, Solaris, Contact, Blade Runner, 2001: A Space Odyssey, and Gravity into something new. (More terrestrial dramas like Apocalypse Now and The Tree Of Life also feel like influences.) He uses the massive scope of the universe as a metaphor for Roy’s isolation, the distance he feels between himself and the rest of his kind. The further into the unknown he goes, the more he craves the comforts of home. For all its otherworldly splendor, Ad Astra ends up telling the most intimate tale imaginable — a man’s journey back to himself. Whether we strive to live up to God’s will, or just our father’s, it’s a futile undertaking. How many lives have been lost in pursuit of greatness? There is no greater glory than human connection — at least, not within our grasp.

Like Ad Astra, Robert Eggers’ The Lighthouse hones in on the relationship between a stoic younger man and a gruff older mentor in a remote location. It just does so with more nudity and flatulence. The Lighthouse takes place in a slightly more accessible location, and it is set in the past instead of the future. But Ephraim (Robert Pattinson) and Thomas (Willem Dafoe) are the only human beings we meet in the course of the story, which takes place entirely on the tiny island that houses the titular lighthouse. So, in a way, these men feel even more cut off from the world than Roy and Clifford do in orbit around Neptune.

Ephraim arrives at the lighthouse for a four-week apprenticeship under Thomas Wake, who, it turns out, is not shy about asserting his prowess over his protégé. Ephraim is subjected to grueling labor around their domicile, handling all of the dirty work while Thomas reserves the actual lighthouse-keeping for himself. What’s so sacred up there in the tower that Thomas keeps so carefully locked? Perhaps Thomas has something mystical and wonderful hidden up there. Or perhaps this is just a manifestation of Ephraim’s active imagination. In a testament to Eggers’ writing and Dafoe and Pattinson’s performances, it’s impossible to keep tabs on which of these men is madder. (Conventional wisdom tells us to go with Dafoe… but who knows?)

As conditions on the island grow harsher, the conflict between these men grows more pronounced. Thomas is brash, flatulent, and prone to babbling, but not immune to having his feelings hurt when Ephraim insults his cooking. Ephraim is sober, secretive, and quietly arrogant; he may also be losing his mind. But the more these men butt heads, the more they enjoy each other’s company — getting stinking drunk, sharing personal tidbits, and even cuddling up together against the lonely night. A pesky one-eyed seagull, visions of a shrieking mermaid, and fleeting flashbacks to Ephraim’s haunted past pepper this severe setting with a streak of the surreal.

Eggers’ film is unclassifiable — one part black comedy, one part elevated horror flick, and also quite the bromance — giving the film a unique texture that is both deeply rooted in the cinematic past, and deeply rooted in nothing. On the one hand, the attention to period detail in language, costuming, and production design lends it an air of authenticity and specificity. On the other hand, it’s a complete concoction, a total fantasy. 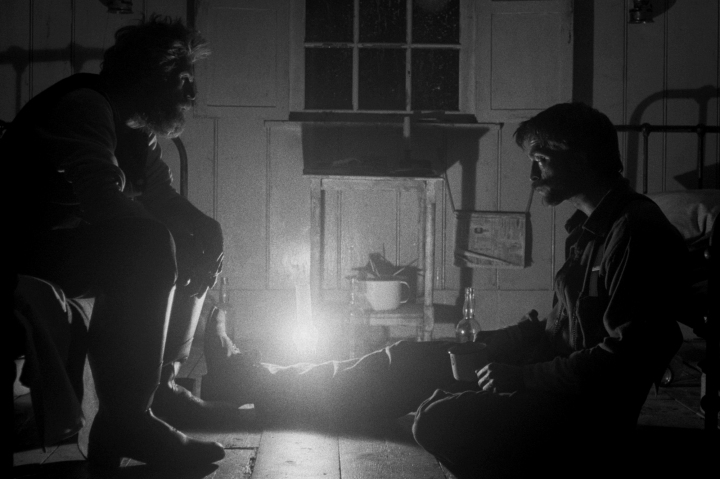 It doesn’t take long before The Lighthouse‘s poker-faced masculinity gives way to some profoundly ludicrous happenings, as if John Waters took the reigns of an Ingmar Bergman film for a couple of hours. We’re rarely sure that what we see has actually happened in this story, either because Ephraim is an unreliable narrator, or Eggers is.

I could probably dig into The Lighthouse and derive some method from madness, but I’m not sure it would do any good. Eggers’ film is a wildly entertaining experience, the kind of film you want to see in a packed movie theater (even though it’s the exact opposite of the kind of film you’re “supposed” to want to see in a theater these days). It’s more like a riff on certain literary themes and tropes than a compelling story in its own right, but it’s a funny, original, intermittently thrilling riff, so perhaps it doesn’t matter if style triumphs over substance once in a while. The Lighthouse is a B-movie hidden in the arthouse — candy for the caviar crowd. It is best not taken any more seriously than that.