“Can you play ‘Jingle Bells’?”

“No, no. I mean ‘Jingle Bells’! Deck them halls and all that stuff?”

“No, no. You don’t get it at all. I mean ‘Jingle Bells’! You know, Santa Claus and ho-ho-ho and mistletoe and presents to pretty girls?”

In our first holiday episode, When We Were Young looks back on Christmas and Hanukkah traditions from childhood, debates the pros and cons of believing in Santa Claus, and shares our favorite festive pop culture (or mourns the dearth of good Hanukkah music).

Then, we check in on the animated Christmas TV specials we watched as kids: Rudolph the Red Nosed Reindeer, How the Grinch Stole Christmas, and A Charlie Brown Christmas. Do these family-friendly specials still make us shout out with glee (“yippee!”), or have they held up as well as a bad banana with a greasy black peel?

We hope you’ve practiced your Snoopy dance, because this is When We Were Young’s holliest, jolliest episode yet. Happy holidays! Not just Christmas!

Nothing says “when we were young” quite like Christmastime (and other applicable holidays). Christmas has permeated American pop culture to such a degree that it’s impossible not to soak it up a little, even if you’re not Christian and have no particular devotion to Jesus Christ’s birthday. For a lot of Americans, Jesus is an afterthought this time of year. It’s a time about gifts, festive music, holiday parties, friends, family, and usually some pretty terrible Christmas comedies. Or, at the very least, it’s time off school and work.

We certainly don’t all have the same experience during the holidays, but it might be the closest we get to something that is so familiar to so many people. That’s especially true of three animated TV specials that air annually during the holidays, and have done so since the 1960s. It’s the first piece of pop culture we’ve looked at that we experienced when we were young, that our parents also could have experienced in their youths. Christmas is a time for comfort and familiarity, the same traditions and iconography cycling around year after year. That’s perfectly captured in the way these short films have been embraced by children of every generation for almost 60 years.

This one is, by far, the most nostalgic for me. Whereas Peanuts and Dr. Seuss were brands that extended beyond the holidays, this particularly story was only found at Christmastime, and it was my kind of story. I enjoyed the fantasy world envisioned by the creators of Rudolph The Red-Nosed Reindeer, with lively characters such as Hermey, Yukon Cornelius, Bumble the Abominable Snowman, and the denizens of the Island of Misfit Toys — especially the winged lion named King Moonracer, which convinces me that makers of this children’s special were smoking a lot of good stuff the whole time.

I’m mostly joking when I say Rudolph and/or Hermey are thinly disguised metaphors for being gay, although it’s easy to read it that way. Rudolph is belittled by his butch father for not being “like other (reindeer) boys,” and finds companionship with a misfit elf and, eventually, several other misfits. It’s also kind of refreshing to see Santa Claus portrayed as a total jerk. (There are plenty of nutty one-liners, including Santa’s “Great bouncing icebergs!”)

Rudolph The Red-Nosed Reindeer isn’t necessarily subversive, but it is pretty kooky, and every minute of it brought back a piece of holiday nostalgia that was buried in the back of my mind. One thing I did remember pretty clearly, even before rewatching this, was Rudolph’s first flight, which occurs when a pretty doe named Clarice tells him he’s cute. Rudolph soars, shouting “I’m cuuuuuute!“, which is the perfect visual metaphor for my own to reaction to that sort of thing.

The podcast also gave me an excuse to look into the original origins of this now-canon Christmas character, which naturally started off as an advertisement. Rudolph The Red-Nosed Reindeer as a story is more about reinforcing commercialism than deconstructing it — the happy ending is Rudolph’s acceptance, which occurs only because children are gonna be pissed if they don’t get mad presents. But its focus on outsiders does highlight a common theme in Christmas tales, which tend to have more than a tinge of sadness to them. The happiness and cheer often seem like an overcorrection for the cold and loneliness one might otherwise feel this time of years. For some, everyone else’s supposed happiness only enhances one’s own year-end bitterness. 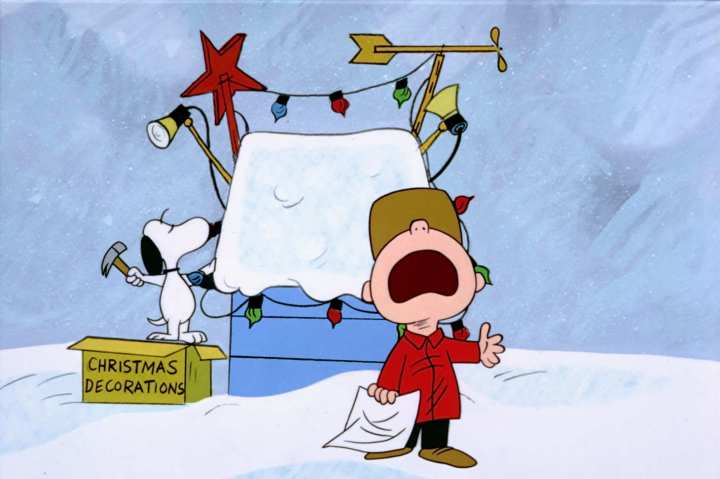 From an artistic standpoint, I find A Charlie Brown Christmas to be the best of these. It certainly has the most mature tone and perspective, in many ways geared toward adults more than kids. Vince Guaraldi’s music is spectacular, with every track now a classic, especially “Christmastime Is Here,” which blends joyful lyrics with a melancholy melody. The Snoopy dance, Lucy’s Christmas wish (“real estate”), and Linus’ monologue combine for a Christmas short that’s alternately witty, charming, and sobering. Plus, I could probably watch the Peanuts all dance in their own way many, many times in a row and continue being delighted.

Charlie Brown’s pathetic tree is probably the real “star” of this show, though — it has become an icon for an alternative spirit of Christmas, one that doesn’t need gaudy gifts and garish ornaments to fill hearts with joy. This underdog Christmas tree is my favorite Christmas icon, hopeful and mournful at the same time — something green and real amongst the cold, depersonalized artificiality. It is not a sentient being, but it’s still one of the most beloved, recognizable, and meaningful Christmas “characters” ever created.

The most surprising thing about A Charlie Brown Christmas is how blatantly anti-commercial it is, not just in its message, but also in several lines of dialogue that especially call this out. It seems odd that a TV special aimed at children would even mention the word “commercial” (at least, without referring to an advertisement). Most young kids now wouldn’t know what “too commercial” means — did kids in the 1960s know? Was this meant as a call to action by the creators, or were they just capturing the national mood?

These specials aired in the early years of the hippie movement, and some kids who watched A Charlie Brown Christmas at a formative age might have taken its anti-establishment message to heart and gone to Woodstock or protested the Vietnam War. Obviously, there was plenty of other counterculture to influence the youth uprising in the era, but I didn’t really expect one of these to be A Charlie Brown Christmas. That makes me like it even more than I already did.

I remembered more from Dr. Seuss’ How The Grinch Stole Christmas than the others, so rewatching it wasn’t as revelatory as the rest. I sang the theme song in junior high choir, and (regrettably) saw the Jim Carrey adaptation. I’ve heard the music plenty in my adult years, though I can’t remember when last I saw the short.

Most of what’s good about Dr. Seuss’ How The Grinch Stole Christmas was created for the book, by Dr. Seuss. The short film capably and cleverly animates The Grinch and his dog, Max, creating two new memorable characters (especially puppy!). Beyond the music, I don’t find that the animated special adds much to The Grinch’s tale, besides simply bringing it to life on screen. It does have great voice work, both from Thurl Ravenscroft (AKA Tony the Tiger) performing the song’s playful lyrics, and from Boris Karloff’s narration.

Animator Chuck Jones and Dr. Seuss first worked together on World War II propaganda films called Private Snafu. The physical layout of The Grinch’s cave looking down on Whoville looks a whole lot like Seuss’ house looking down on La Jolla. It’s clear that Seuss saw a little something of himself in The Grinch, as many of us probably can.

The short ultimately has The Grinch join in on the collective Christmas experience in Whoville, even carving the Roast Beast. However, it is at its best when The Grinch is a villain, looking down on Whoville with disdain. (In his defense, the Whos do seem pretty cloying.) The Grinch is reacting against the forced cheerfulness and ornate overkill we all see during the holiday season, and I’d wager a lot more of us sometimes identify with his irritation than don’t.

The commercialization of Christmas has never particularly bothered me, especially since I’ve never observed the holiday religiously. I like Christmas, and maybe part of the reason is because so many songs, films, and animated TV specials make room for a little darkness amidst the cheer.

Categories: TV, When We Were Young