“The Water Is Freezing And There Aren’t Enough Boats” (#30)

“You can be blasé about some things, Rose… but not about Titanic.”

It’s been 20 years, and we can still smell the fresh paint… the sheets had never been slept in… and we’d never heard Celine Dion belt her heart out over James Horner’s pennywhistle. To mark the 20th anniversary of a film as gargantuan and ambitious as the ocean liner itself, When We Were Young once more opens the door on James Cameron’s 1997 disaster-romance. Are you ready to go back to Titanic? (If not, too bad — it’s way too late to get off.)

Everyone knows Titanic dazzled critics, swept the Oscars, and sold a hell of a lot of dreamy Jack Dawson posters. The self-proclaimed King of the World’s crowning glory went on to become the biggest movie of all time on so many levels, a pop culture event as rare as the Heart of the Ocean. But are Kate Winslet and Leonardo DiCaprio’s performances still unsinkable? Is the film’s elaborate production as impressive as ever? Do our hearts really go on and on… or is it time to break our promise and just… let go?

Strip down to nothing but a multimillion dollar necklace, prepare to go down like a gentleman, and cooome baaaaaaaack… because there’s not enough room for everyone on this Podcast of Dreams.

Listen to the episode on iTunes!

Kenneth Turan, LA Times: “Many of the characters, especially the feckless tycoon Cal Hockley (played by Billy Zane) and Kathy Bates’ impersonation of the Unsinkable Molly Brown, are cliches of such purity they ought to be exhibited in film schools as examples of how not to write for the screen.” (This review was called “Titanic Sinks Again.”)

Roger Ebert, Chicago Sun-Times: “James Cameron’s 194-minute, $200 million film of the tragic voyage is in the tradition of the great Hollywood epics. It is flawlessly crafted, intelligently constructed, strongly acted and spellbinding. If its story stays well within the traditional formulas for such pictures, well, you don’t choose the most expensive film ever made as your opportunity to reinvent the wheel.”

Here’s the thing — I love Titanic.

Seeing her come out of the darkness like a ghost ship still gets me every time.

I love everything about this movie, which doesn’t mean I think it’s a perfect film. If I could, I’d go through the script and cross out lines, because characters tend to say the same thing two or three times when one would do. The names “Jack” and “Rose” are used much too often. Some lines sounds anachronistic, and others just sound kinda clunky.

That said, I hesitate to throw the baby out with the ice-cold bathwater, because in ambition, scope, size, and impact, Titanic the film perfectly mirrors Titanic the ship. (Although Titanic the film was inarguably much more successful.) Titanic‘s earnestness is what made it such a sensation in the first place — moviegoers had been starved for an old-fashioned sweeping epic for decades by this point — and it wouldn’t be the same movie if it had more grit or realism. Titanic is a soaring spectacle, for those who appreciate it, the ultimate in Hollywood escapism. It is, quite purely, everything a crowd-pleasing movie should be, and it’s certainly not high art. I love films that make me think, question, fear, or despair, that haunt me for days after I see them. But for me, Titanic hits the sweet spot when I don’t want that. The story of its making is almost as legendary as the sinking itself, especially in how it dominated pop culture like no other film of this era.

Titanic isn’t big and dumb — if it were, I wouldn’t like it. Broad? Certainly. It was made to be riveting to men, women, boys, and girls of every age, in every country. It’s a throwback to films like Gone With The Wind, still the biggest blockbuster of all time when adjusted for inflation. I’ve studied what it was like when these classics were released, up through the 70s and early 80s, but I missed the boat on experiencing the excitement myself. Then, along came Titanic. I can’t be certain whether any other movie really captured so much of the media landscape upon its release. Star Wars didn’t launch a smash hit on the radio, and it probably didn’t appeal to as much of the American populace as Titanic did. I don’t think I’ll ever see another cinematic phenomenon like Titanic, so I’m sure glad I was around to soak it up the one time all the stars aligned just right for a movie of this size and scope.

It’s not just the movie, it’s the phenomenon that gets me. There are films from my youth I have more affinity for, but I can’t point to any of them the way I can point to Titanic and say, “There. That was a whole year of my life.” It was a gateway drug to more adult movies — James Cameron’s other films, to start, and more mature genres like romance and tragedy. It was the film that proved to be that the power of cinema is limitless — one film can permeate just about every culture in the developed world. It can inspire the kind of insane fandom Titanic has, not just from fanboys (as with most other movies of this size) but from people of every age, sex, and place. Part of this is probably the naivete of a fourteen year old, but for one year it felt like every single person in the world was connected through Titanic. Other films would go on to have a greater impact on the kinds of stories I like to tell, but I’m not sure any drove me toward wanting to make an impact more than Titanic.

Granted, I’d probably never make a film like Titanic, even if it were still possible (unlikely). But that’s not the point. Titanic is the epitome of a filmmaker willing his celluloid creation to life, winning the fans, the box office, the awards (and most critics). It did everything. Repeating its success is unfathomable, but it’s thrilling to know that that sort of thing was possible once, and who knows? It could be again. I don’t set my sights on Titanic as a role model, but Cameron’s passion and the film’s ambition are something of a guiding light. If Titanic is possible, then so is everything else. 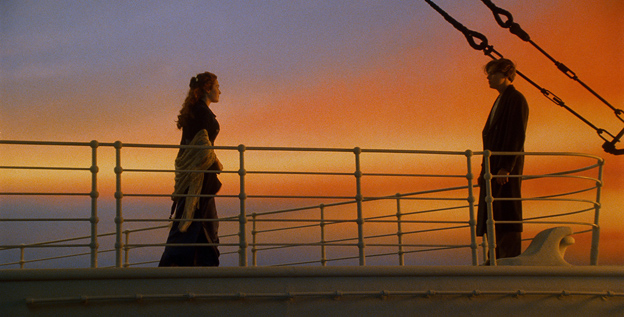 Categories: Movies, Movies That Made Me, When We Were Young