Eye Of The Beholder: Beauty Bares Its Teeth In ‘Neon Demon’

I’ve seen a lot of movies. A lot of them contain some pretty shocking stuff. I don’t necessarily like gore or explicitly disturbing subject matter, but my cinematic journeys often lead me toward such material anyway. I’m more adventurous than the average moviegoer. Sometimes, I think I’ve seen it all.

After a while, one act of abhorrent violence is just like all the rest. It’s rare to encounter a scene in a movie that feels that new, that novel, truly unprecedented. The final scene of Enemy was, perhaps, the last piece of cinema to truly make me sit up in my seat and say, “What the fuck?”

Whoever you are, whatever you’ve watched… there’s something in The Neon Demon I can pretty much guarantee you haven’t seen.

The Neon Demon is brought to us by Nicholas Winding Refn, director of the superb Drive and the noble failure Only God Forgives.Drive had a few bursts of appalling horror, including a fork in Albert Brooks’ eye and an abruptly icky end for poor Christina Hendricks. Only God Forgives was most notable for a supporting turn from Kristin Scott Thomas, cast way against type as a bitchy, blood-thirsty mama bear who likes to compare her sons’ penis sizes.

So the fact that The Neon Demon is shocking is not all that shocking by itself. We’ve seen many tales of pretty young things coming out to Hollywood, encountering soulless Angelinos who seek to corrupt our doe-eyed ingenue. These range anywhere from campy candy (Burlesque) to seriously sour grapes (Maps To The Stars). Maps To The Stars was peppered with angry ghosts, pyromania, dog-shooting, and incest — a vile concoction, to be sure, but The Neon Demon outdoes it. The Neon Demon also shares some of Mulholland Drive‘s surreal DNA. Like Collateral, it features a striking cameo from a wild animal that is probably less vicious than most of its human characters. It may not make as much of a lasting impact as these other “so L.A.” movies, but it’s not for lack of trying.

Drive‘s brutality was watered down with lovely sequences of Ryan Gosling driving around the city, falling in love with Carey Mulligan to an appealing pop soundtrack. Though surely conflicted in its affections, it ultimately played as a love letter to Los Angeles. The Neon Demon is a ransom note laced with anthrax. 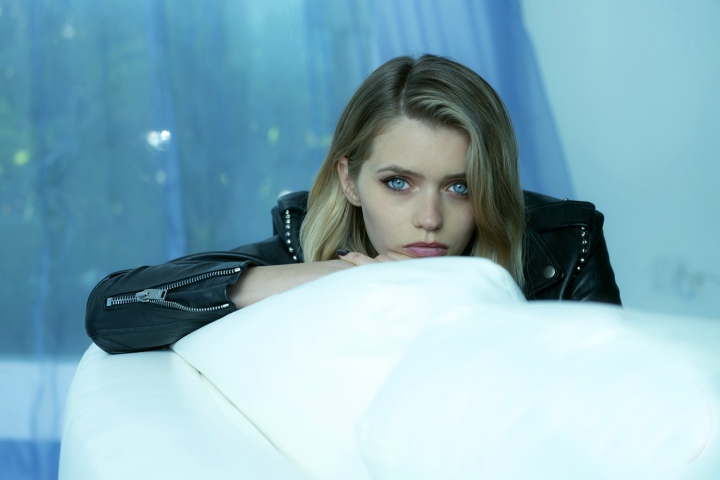 The sparse storyline finds fresh-off-the-bus Jesse (Elle Fanning) living in a fleabag motel in Pasadena. She’s a friendless, talentless orphan who knows only one thing: that she’s pretty. She intends to make a living off that singular asset, first posing for a blood-soaked photo shoot with a guy she met on the internet. The photographer, Dean (Karl Glusman), turns out to be the most decent guy a teenage girl ever met on Craigslist. He and Jesse end up hitting it off.

Then Jesse signs with ruthless high-powered agent Roberta Hoffman (Christina Hendricks), who assures Jesse that she’ll be a big star someday. Makeup artist Ruby (Jena Malone) is keen to befriend Jesse, though her hungry gaze is more unsettling than amiable. Through Ruby, Jesse also meets Gigi (Bella Heathcote) and Sarah (Abbey Lee), two models who are more experienced (and more conventionally “hot”) than Jesse is. They’re immediately threatened by Jesse’s fresh, youthful look, taking every opportunity they can to rip her to shreds.

Despite these hindrances, Jesse slowly but steadily gains confidence, working with the top photographers and designers in the business. Along the way, she scores some triumphs against the haters, but her meteoric rise to model stardom flags concerns in her doting suitor, who worries that Jesse will lose her innocence. 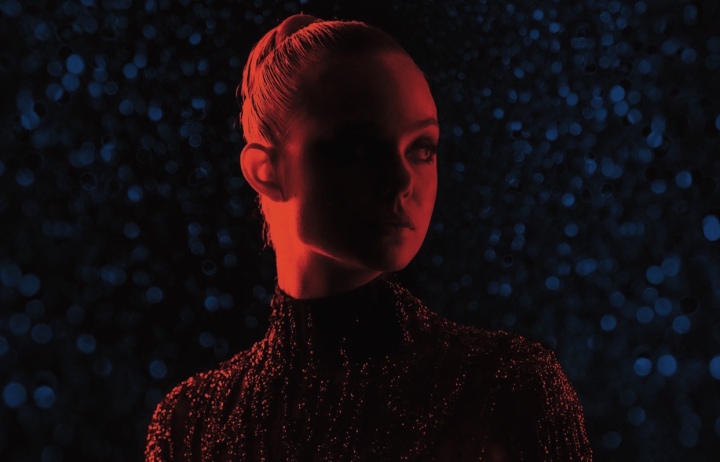 Pretty standard, right? Of course, this setup sounds like a subplot from Melrose Place. It’s all very soapy in its broadest strokes, but there are ominous harbingers of darker developments ahead. Did I mention that Ruby moonlights as a makeup artist to the dead? Or how about the menacing motel manager, Hank (Keanu Reeves), who exploits Jesse’s helplessness by making her pay for damage she definitely shouldn’t have to pay for? This is a Nicholas Winding Refn film, after all, so it’s highly probable that there will be blood.

The proceedings play out almost like a satire of “young girl trying to make it in the big city” genre. Everyone Jesse meets is utterly disarmed by her perfect looks, most evident in a scene where Jesse strips down to her bra and panties in a room full of other barely-dressed models. The models are asked to do nothing but walk back and forth across the room, and to the untrained eye, there’s absolutely no difference between them. The snobby designer yawns his way through most of the auditions, but when Jesse walks, he practically gives her a standing ovation. It’s absurd, but Refn is only calling out the ridiculous trope we’ve seen so many times, in which the protagonist is constantly deemed “special,” in which she has some intangible X factor / “it” factor that makes her better than all the rest. It’s similar to that self-delusion young people have to believe in when they come to Hollywood — “I can make it, even if nobody else can!” This movie turns that trope on its head, and then severs it. 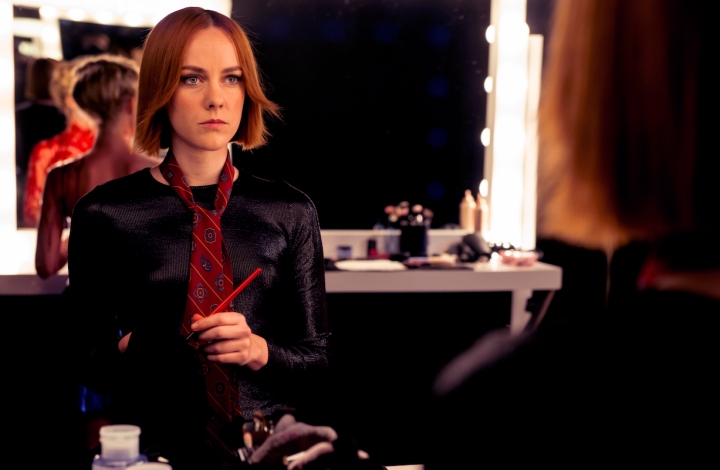 The Neon Demon displays Refn’s trademark preference for style over substance, with an 80s synth-driven score by Cliff Martinez (who provided his standout services on Drive and Only God Forgives, too) and a slew of gorgeous images that really do look like they’ve been ripped out of a glossy magazine. Nearly everyone in the film comes across as a vapid, morally bankrupt narcissist, which is totally intentional, of course. The dialogue is spare and, with some notable exceptions, unmemorable. With all the dead space of silence in the film, you can practically hear your soul curdling while you watch it.

Is that your idea of a good time? Then you may love The Neon Demon, which is curiously slow-moving for a film that eventually goes so very far over the top. In its third act, The Neon Demon maneuvers in a way that’s tricky to pull off, calling into question who this movie is really about. (The character we’re focused on at the tail end of the film is not one we pay much attention to when we meet them early on.) There is one subplot that goes absolutely nowhere and feels curiously unfinished. The Neon Demon also treads in some tired cliches and is ultimately even more sickeningly voyeuristic than the culture it lampoons. Its depiction of women overall and one particular gay character might be problematic, if The Neon Demon didn’t seem so down on the human race itself.

The Neon Demon doesn’t have anything particularly new or novel to add to the popular “Hollywood is full of selfish assholes who will eat you for breakfast” genre, but it certainly pushes it to new extremes. This is the sort of movie in which a character vomits up a human eyeball, and that’s not even the grossest or most bizarre part of the scene.

I came out The Neon Demon wishing Refn had found something a bit fresher to sink his teeth into. The film has the power to transfix from moment to moment, but its characters are thin even in comparison to the nameless stoic protagonist of Drive. (And not just because they’re models!) It doesn’t come together as well as that film did, mostly due to our apathy for Jesse, whose true nature is drawn for us in only the sketchiest of outlines (despite a solid turn from Fanning). Yes, Refn is doing his take on an archetype, but there’s so little to her character that her fate means nothing to us. The Neon Demon plays out as a battle for Jesse’s soul, in part, but there’s so little soul there that it feels like there’s nothing at stake.

When The Neon Demon finally shows its freaky fangs in the finale, the film comes together better than it seemed like it was going to, adding at least one stomach-turningly memorable gag to the ranks of Hollywood satires. But that’s not quite enough. The production is delectable as always, but the screenplay lets us down, ultimately sounding off with more bark than bite. That’s a shame in a movie that’s so determined to tear everyone in it to pieces.