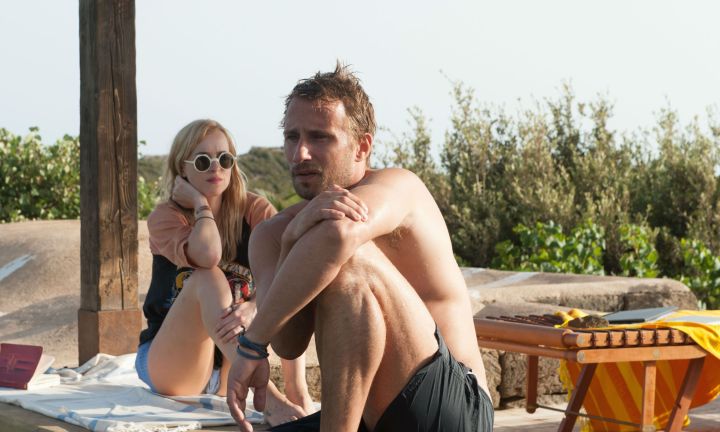 Tilda Swinton is a rock star.

Few serious film fans would argue with this, but in Luca Guadagnino’s A Bigger Splash, it’s literally true. Swinton plays Marianne Lane, a musician who appears to be some kind of cross between Patti Smith and David Bowie. (Can we make this happen in real life, please?) Unfortunately, she’s also suffering from severe strain on her vocal chords (a la Adele), so when we meet her, she’s enjoying a long summer of R&R on an island in the Mediterranean. (That’s how rock stars “rest,” of course.)

That also means Swinton doesn’t actually speak in A Bigger Splash, aside from a few hoarse croakings. Fans of the kooky Oscar winner will be totally unsurprised to learn that that doesn’t diminish her performance in the slightest. A Bigger Splash is a nutty piece of cinema that veers wildly between tones, from the lushly romantic to the absurdly comedic to the melodramatic to the macabre, often even within the same scene. It’s hard to know whether Guadagnino wants us to laugh at or cry with these characters, to empathize with them or look down upon them. Maybe all of this?

The story finds Marianne and her longtime lover, Paul (Matthias Schoenaerts), interrupted in their Italian bliss by Marianne’s ex, Harry Hawkes (Ralph Fiennes), a loudmouth music producer whose antics sway fluidly between exhilarating and exhausting. Paul would rather not have Harry stay with them, but Marianne harbors some nostalgia for her cocaine-hazed heyday at his side, so Paul allows it. But Harry has also brought along his young, lost-lost daughter Penelope (Dakota Johnson), who makes it clear with a few showy, dramatic looks early on that she intends to cause trouble. 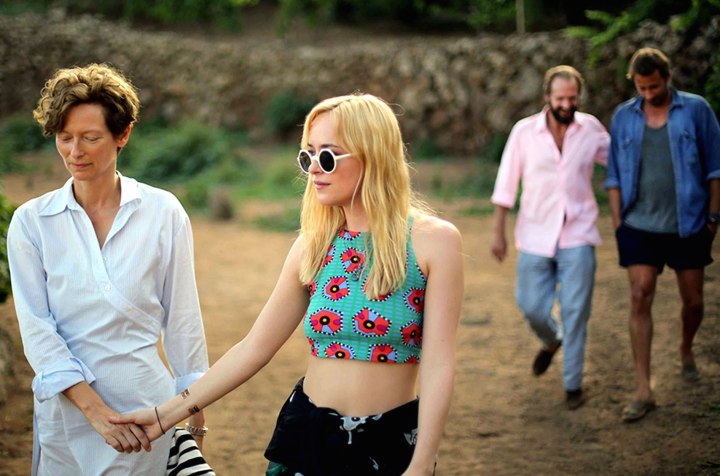 Then again, it’s hard to be sure which of this foursome is the one we should watch out for. Truth be told, they’re all capable of being dangerous and damaging when provoked.

A Bigger Splash has indelible moments of all kinds — comedy, romance, tragedy, horror — including a Rolling Stones dance-along displaying Fiennes in fine form (and much goofier than we usually see him) and a sad denouement in which one character — ostensibly, the movie’s villain, though that’s debatable and your opinion may shift from scene to scene — receives a deserved dressing down at an airport in the rain, and then we end up feeling bad for this person anyway, despite that well-needed comeuppance. In A Bigger Splash, there are three key tensions bubbling under the surface: first, Penelope’s obvious attraction to Paul, brought to light in a slew of come-hither glances he politely deflects; second, Paul’s alcoholism, a demon he’s happily put to bed; third, Harry’s hankering for Marianne. He’s Paul’s polar opposite in so many ways — free-spirited, vibrant, and fun. Paul is the perfect kind of guy for a seen-it-all rock goddess like Marianne to settle down with, but are we sure Marianne wants to be settled down?

In a more conventional film, the way these things play out would be pretty obvious, but A Bigger Splash holds out on all of its tensions, forcing us to constantly wonder what, precisely, this movie is even primarily about, and who we should root for and against. Infidelity is a key threat, but these are unusual people, and we’re not even sure what infidelity means in these relationships. We learn that “anything goes” with Harry, who also has a thing for Paul, and Harry’s rekindled relationship with long-lost daughter is intimate, bordering on incestuous.

This is not a film about a married person dealing with the secrecy and consequences of an extramarital affair, as so many movies are, and as its set-up might have you believe. Paul and Marianne seem genuinely happy; it’s unclear exactly how these somewhat less happy intruders will shake things up, but we know that they will. Thanks to the loss of Marianne’s voice, Swinton does most of her acting with gestures and her expressive face. She’s up to the task, naturally — it’s a beautiful performance (and very well-costumed). 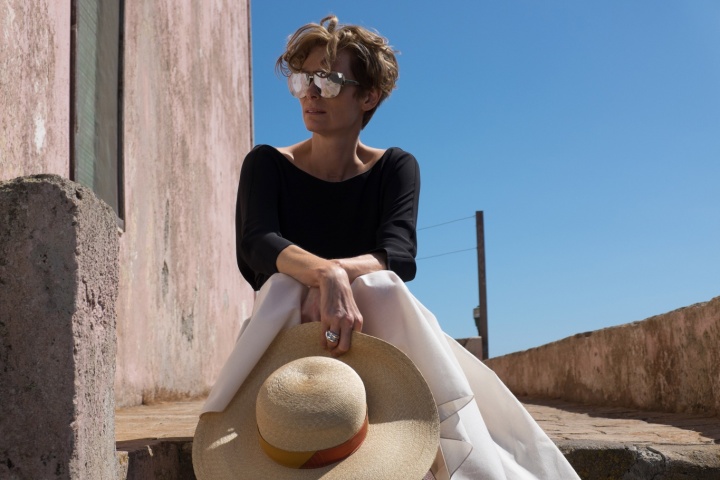 During its most jarring tonal shift, A Bigger Splash does eventually get around to living up to that title, and ends on a note that’s both melodramatically mournful and playfully satirical about Marianne’s fame (which is mostly incidental throughout most of the film).

At times sumptuous, as one would expect from the filmmaker behind his last Swinton collaboration, I Am Love, the cinematography is sometimes erratic to the point of feeling improvisational, stubbornly refusing to settle into any one groove. The cast is nice to look at, in and out of various states of undress, and Fiennes lets it all hang out literally and figuratively in a brazenly funny (and willfully obnoxious) performance. A Bigger Splash is not a film for those who tolerate only the steady, predictable rhythms of a studio film, but offers plenty of pleasures for those seeking a rockier, more offbeat cinematic getaway.

The same is certainly true of The Lobster, the latest film from Yorgos Lanthimos, who previously brought us Alps and Dogtooth. Like those films, its premise borders on science fiction, though its execution, his aesthetic is stark and realistic, far from something like Blade Runner. (As with Guadagnino and A Bigger Splash, Lanthimos is working with internationally-known stars in English, unlike his previous works.)

The Lobster takes place in a world where all humans must be paired off with a suitable mate or turned into an animal of their choosing. The first scene — not at all relevant to the plot, but brilliant at setting the tone of this highly unusual story — has a woman carry out an act of vengeance upon a donkey we can only assume wronged her terribly in its previous human form. Then we meet David (Colin Farrell), who is checking into a hotel designed to pair loners up with a suitable mate. He has 45 days to either find a significant other, or become the titular lobster. Anyone who has ever set a romantic deadline — finding a date for Valentine’s Day, or procuring a “plus one” to a wedding — can at least sort of relate. 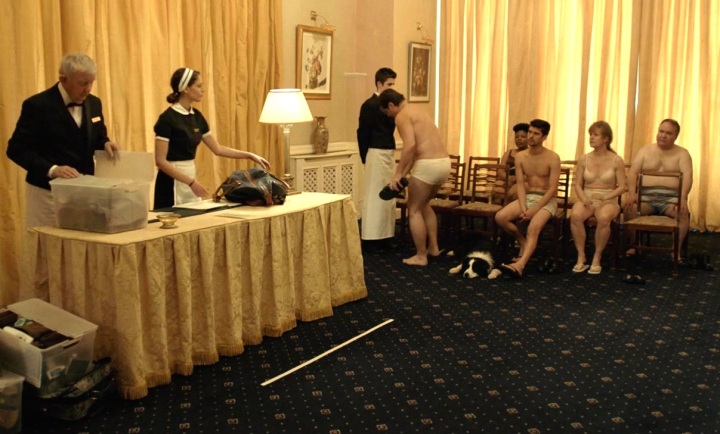 This is the short of movie in which the actors are credited with character names such as “Bandaged Loner,” “Donkey Shooter,” and “Nosebleed Woman’s Best Friend.” Only our protagonist has a proper name. (Well, so does his brother… but his brother is now a dog.) Earlier this year, I joked that Alejandro Inarritu’s The Revenantplayed like a horror movie made by American wildlife, but The Lobster has a comparable number of animal casualties. There are plenty of dead critters in The Lobster, although a lobster is not one of them. Point being: this is not a date movie, unless it’s a date you’re hoping to break up with afterward.

Upon arriving at the hotel, guests are forced to surrender their clothing so they can all be dressed identically, and their first night is spent with one arm handcuffed behind their backs as a reminder of how much better two is than one. The Lobster is mercilessly deadpan about these bizarre customs, but of course, it only highlights the many absurdities of pairing off in the first place. In a series of morbidly funny skits, the hotel goes to great lengths to convince its guests of reasons why being a twosome is preferable to being alone (you could choke to death if you eat alone; you can more easily be raped when strolling solo). Hotel guests are also frequently rounded up on organized hunts, forced to literally shoot single people (with tranquilizers), since all singles roam the forests in constant fear of being captured and critter-fied. It’s funny, but it’s also only a slight exaggeration of the way married people view their single friends… right?

The Lobster contains a surprise in every scene. It’s impossible to predict where the story’s going. Early scenes involve David and his two “friends” (played by Ben Whishaw and John C. Reilly), all desperately seeking companionship not because they’re lonely, but because they’ll cease to be human without a mate. Marriage itself doesn’t seem to exist in this world; choosing a partner is enough. Children are “assigned” later. David has a couple of potential partners: a woman who announces her plans to commit suicide if she can’t find a lover, just after proposing casual sex, and a woman who can most kindly be described as a stone-cold bitch.

Pairings in this world are not based on love, but on arbitrary similarities (we’re both shortsighted; we’re both heartless; we both have frequent nosebleeds). If you can’t find someone you’re “compatible” with, you aren’t fit to be human. Most of the characters we meet are not hopeful about finding potential partners. They think they won’t make it. Those who do don’t become any happier. If anything, they’re just relieved. 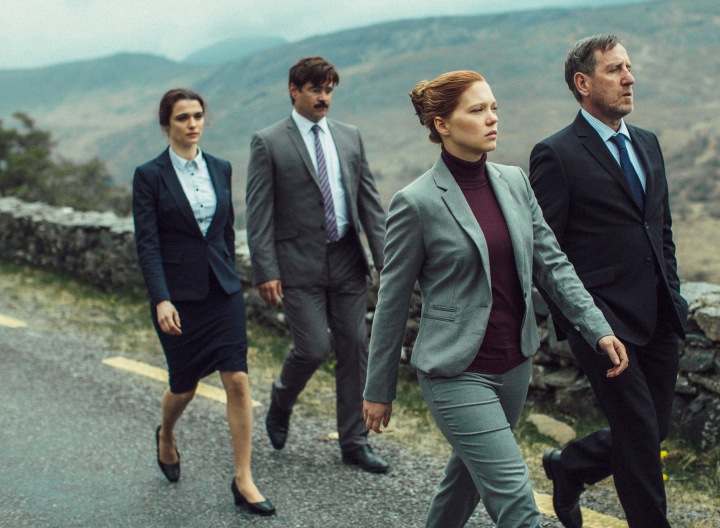 The premise of The Lobster is an absolutely absurd yet brilliant conceit. Its lampooning of societal constructs is obvious, for these are societal shackles we’re well familiar with. (It’s impossible to miss the metaphor.) The dark humor is peppered with occasional eruptions of horrific violence, and then there is a genuine romance at its center once David meets a short-sighted woman played by Rachel Weisz.The way this plays out is as quirky and unexpected as the rest of the film, but no less charming for it.

Not every plot movement in The Lobster totally works. There’s a villain of sorts (played by Léa Seydoux), who gets either too much or not enough emphasis in the film’s latter half. Her motives feel too simple for a character we spend so much time with, and it is she, rather than our lead characters, who drives the action in this story, while David all but disappears. In the last act she inflicts an act of cruelty upon someone that doesn’t seem to quite fit in the bizarre world Lanthimos has so carefully built. (It seems this section of the film should center more around the animal conceit somehow.)

Still, The Lobster is one-of-a-kind, and a welcome respite from more predictable Hollywood romances. It’s as bitter as any love story you’ve ever seen, and ends up being even more jaded about friendship than it is about romance, though there’s a hint of sweetness here and there. The Lobster is imperfect but unforgettable, just as so much of A Bigger Splash is. In ways, the two films couldn’t be more distinct — A Bigger Splash practically simmers with lurid, sexy heat, while The Lobster is stone cold in its depiction of sex, love, and death. If the summer movie season is a barbecue stuffed with the usual grilled goodies we’ve tasted before and will feel vaguely sick of after we’ve wolfed them down, Guadagnino and Lanthimos boldly offer us these spicy side dishes for a little extra kick. It’s a welcome respite. 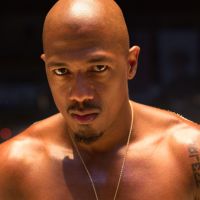