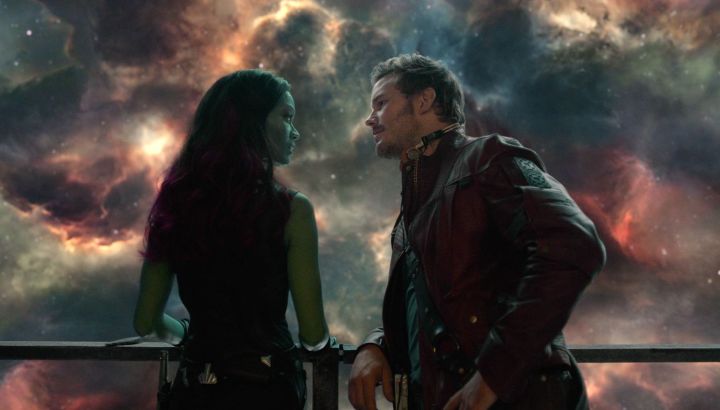 A few years back, Joss Whedon surprised us by releasing a superhero movie that satisfied all the mega-blockbuster mega-requirements and still found room for a little of the Buffy creator’s trademark meta-wit.

Since then, Marvel movies have all included a Whedon-esque gem or two. They certainly don’t take themselves as seriously as Christopher Nolan’s broodier comic book films — nor should they. But they haven’t exactly been laugh riots, either. Even when the stories would seem to make plenty of room for hilarious hijinks — like when brawny god Thor has to contend with 21st century mankind on Earth, or Captain America must adjust to having slept through the past few dozen decades — the Marvel movies never manage to elicit more than a chuckle or two at their heroes’ expense. Maybe the men who direct them are not well-suited for comedy, or maybe Marvel executives have been too leery to get too funny, lest their superheroes lose some of their machismo appeal. Even The Avengers opened with a bloated and largely humorless opening act that felt like it was written and directed by someone who was not Joss Whedon.

You can imagine versions of Thor, The Incredible Hulk, and Captain America that are outright comedies. All superhero stories are, at their essence, ridiculous, and I’d argue that almost every Marvel movie up until this point should have been funnier. Robert Downey Jr.’s Tony Stark is maybe the only Marvel character thus far to live up to his comedic potential, which is ironic because on paper, his situation is the least funny. All Marvel movies have at least one really good joke — I’m thinking of Steve Roger’s early days as a WWII PR machine in the first Captain America, or Thor hanging his epic hammer on a coat rack — but seldom more than two or three.

Marvel’s latest superhero feature, however, probably has more good jokes than all the other Marvel movies combined. Is this an aberration, or the dawn of a new era for the already well-worn Marvel formula? If Guardians Of The Galaxy‘s stronger-than-expected box office showing is any indication, this may just be the harbinger of a brave new hilarious world forming in the Marvel universe.

Remember when I said that all superhero stories are inherently ridiculous? Well, some are more ridiculous than others, and this one is near the top of the heap. I was not familiar with the Guardians Of The Galaxy property prior to this film, but I have a hard time believing that any comic book featuring a talking tree named Groot and a wisecracking raccoon bounty hunter is asking to be taken very seriously. A Guardians Of The Galaxy movie was always primed to be a comedy, of course. Unlike most of the Avengers cast of heroes, Guardians Of The Galaxy was a property that almost no one cared about, which is probably why Marvel was willing to deviate from formula a little and poke fun at the usual straightforward seriousness of their franchises.

Is Guardians Of The Galaxy a full-on comedy? I don’t know. I don’t think so — the actual plot itself isn’t remotely funny, and it still hinges on an epic battle with the fate of an entire planet at stake, as so many of these movies do. An even bolder Guardians Of The Galaxy might have done away with such shenanigans entirely and concerned some smaller, lower-stakes MacGuffin. Or the whole thing could have been a prison break movie. Whatever. Guardians Of The Galaxy was co-written and directed by James Gunn, perhaps the most Joss Whedon-y filmmaker you could find who is not actually Joss Whedon — a guy who knows how to mix genuine genre with elements that are also spoofing that genre (a la Whedon).

It’s the first time a Marvel movie has been as funny as it should be since The Avengers, and probably the best Marvel movie since then. It’s hard to imagine anyone not being at least slightly amused by the antics on screen here, and as an avid champion of underdogs everywhere, I’m pleased that it’s comic book characters no one had even heard of until this movie came about that have surprised and delighted this summer’s moviegoing audiences. Not the interminable Transformers, not the ill-conceived sequel to the iller-conceived reboot of Spider-Man, not the giant lizard or talking apes or time-traveling mutants we’ve seen on the big screen so many times before. After last summer’s dreary offerings, it’s great that we’re closing out the 2014 season on a sky-high note.

Also, can we take a minute to realize that, once Guardians Of The Galaxy has finished its box office tally, Chris Pratt will be not only in, but the star of, two of the three biggest movies of the summer?

Pratt plays Peter Quill, AKA Star Lord, who we’re introduced to as a child as he sits at his ailing mother’s bedside in an opening that should definitely be cheesy, but is actually somehow fraught with emotion despite the fact that we’ve seen so many similar dying mom scenes. (Very few end with the grieving child being abducted by aliens, however.) We are then re-introduced to Quill as he dances on an alien planet to a cassette tape dubbed “Awesome Mix Volume One,” and yes, it is awesome. Imagine if Star Wars had abandoned John Williams’ score and instead just strung together a bunch of hits from the 70s from “Hooked On A Feeling” to the Jackson 5, and that’s about what you get here. (Okay, now stop being sad about a world without John Williams’ Star Wars score — it was only a hypothetical.)

Pratt’s signature comedic sensibilities find a perfect home here, and he’s a large part of why this works. Unlike a lot of action hero types, he’s not a stud trying to be funny. He’s a comedian trying to be a stud, which works out way better for us all. Dave Bautista is surprisingly good as Drax, some sort of space badass who helps Quinn break out of prison; Bradley Cooper is a verbal scene stealer as Rocket the raccoon; Vin Diesel literally has one line (repeatedly) as the charming tree Groot, yet manages to be one of the film’s funniest characters. Zoe Saldana, on the other hand, has less to do as the traitorous (in a good way) Gamora — she’s the straight man who just so happens to be a green-skinned woman. (Sidebar: has Zoe Saldana told her agent that she is only accepting roles in which she plays some other-colored version of herself? Has this girl got some kind of CG-infused Michael Jackson complex or what?)

Guardians Of The Galaxy manages to pull off a feat that even The Avengers could not, which is to introduce us to a group of characters who feel like they were destined to adventure together. Who are better off together than apart. I’m not hating on The Avengers, but those guys hail from wildly different mythologies that obviously weren’t created with a singular story in mind — I mean, do you really need The Hulk and Thor? Isn’t that kind of redundant? In a lot of ways, Guardians Of The Galaxy feels more like a TV pilot than a movie. (The TV pilot that Agents Of S.H.I.E.L.D. should have been, perhaps?) And it means that the inevitable Guardians Of The Galaxy sequel is not only desirable, but necessary. We actually want to see what these guys get into next.

I don’t want to oversell Guardians Of The Galaxy, because at its core, it’s as cookie-cutter as every Marvel movie, with basically the same plot as all the rest. I wish we cared more about what actually happens in the movie — considering that an entire planet might be obliterated in the film’s climax. It’s called Xandar, it’s led or protected or something by Glenn Close’s Nova Prime, and… well, that’s all we know, other than that it’s clean and white and looks like a futuristic Canada. None of the main characters have any personal attachment to Xandar, and nor do we (unless you’re a huge Damages fan). So why bother putting an entire planet in jeopardy at all? As fresh and surprising as Guardians Of The Galaxy is in many ways, I wish it wasn’t paired with the most overused and predictable available story. Here’s the synopsis: “[Powerful object you’re unfamiliar with] must be obtained by [Marvel hero(es)] before [generic villain] gets his hands on it, or [Earth, or other civilization] will be decimated.” That may work for an Avengers-scale production, but when the goal is quirk and comedy, must we really return to that well again?

I can’t help but wish the movie had been even less Marvel-ous. Surely we could’ve had more fun with Benicio Del Toro’s Collector character, who barely makes an impression here. There’s a cool blue villainness named Nebula who also gets the short shrift, and the generic main villain Ronan (Lee Pace), who looks awesome but does nothing, is as forgettable as… some other generic villain I forgot. If the movie doesn’t take its threats seriously, how are we supposed to?

What’s novel here is how little the story actually matters. We have fun with the Guardians, no matter what they’re up to. It could have been just as entertaining and fraught with peril if these guys had been shopping on a particularly busy day at IKEA. Chemistry is important in any ensemble, of course, but that’s particularly hard to pull off when four out of five cast members have some heavy visual effects work going on, and two out of five are completely computer animated. Guardians Of The Galaxy blends its cast of characters pretty seamlessly.

This movie is about as subversive as Marvel is bound to get these days, which is not that subversive at all, but still more subversive than you’d expect. (One raunchy joke involving a blacklight will easily fly over childrens’ heads, but I appreciated it.) I still prefer to have more emotional investment in a superhero story than I had here, because a stray shot of one pink-skinned child is not enough to put me on the edge of my seat about whether or not her civilization is doomed. In that respect, I still give the edge to Iron Man and The Avengers in terms of Marvel movies that delivered the whole package.

I admit, however, that Guardians one-upped The Avengers on the laugh quotient — which means the ball is in Joss Whedon’s court. Avengers: Age Of Ultron is up next.