The Two Jakes: Bugs, Blondes & Blueberries Are The ‘Enemy’ 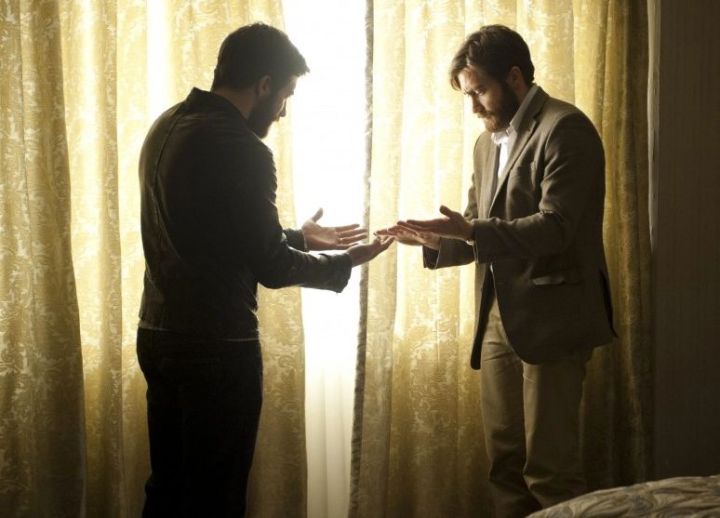 In cinema, there are twist endings… and then there are endings that are so twisted, so gnarled, so completely screwed up they leave you sitting in the theater with your mouth hanging open puzzling over what the hell just happened until the end credits are over.

Denis Villeneuve’s Enemy has such an ending.

But let’s start at the beginning. Enemy is the second English-language film from Canadian filmmaker Denis Villeneuve, though technically it was filmed before Prisoners, which also starred Jake Gyllenhaal (and an impressive cast of other high-caliber actors, including Hugh Jackman, Viola Davis, Paul Dano, Terrence Howard, Maria Bello, and Melissa Leo). Prisoners was an enjoyable but muddled and largely incoherent thriller with some unfortunate gaping plot holes that undermined its plausibility, and a lot of storylines and characters that went literally nowhere. (The real crime: Viola Davis was totally wasted.) The fault lied in the script rather than in Villeneuve’s taut direction; it was twisty and turny in the usual ways, with a few minor surprises along the way.

With that simple, ambiguous title, Enemy sure sounds like it could be the sequel to a film called Prisoners, but besides leading man Jake Gyllenhaal and Villeneuve, the two films couldn’t be more different. Enemy is by far the smaller of the two, in terms of look and scope, with only five or six characters of significance. It certainly feels like the kind of movie a director would make before prestigious, studio-friendly fare like Prisoners; it’s quirky, murky, and deliberately confounding. A lot of people would prefer the straightforward thrills of Prisoners, but I’m more transfixed by Enemy, a film I will need to see several more times before I feel like I have a solid grasp on what it’s actually trying to say. I knew the film had a surprising ending, and so I braced for it; yet I doubt there’s a single filmgoer in the entire world who could have predicted what happens in the last scene of this movie. It’s the ultimate cinematic “What the fuck?”, and it’s delightful.

In Enemy, a milquetoast history professor named Adam finds himself experiencing a nasty case of Vertigo when he rents a DVD from the local video store (thanks to a colleague’s recommendation) and discovers an extra in the film who looks exactly like him. That man turns out to be the small-time, Toronto-based actor Daniel Saint Claire, whose real name is Anthony. Adam does some light stalking to find out where Anthony lives; he calls his doppelganger’s home and speaks to his wife, Helen (Sarah Gadon), who is severely confused by the man on the phone who sounds just like her husband but claims to be a stranger. Adam doesn’t tell his girlfriend Mary (Melanie Laurent) anything about this, and his mother (Isabella Rossellini) isn’t very helpful. Neither Anthony nor Adam reacts to these events the way you’d think a person would.

That’s because there’s clearly something larger going on here. Villeneuve strikes up an unsettling tone right from the very beginning, when we see one of the two Jakes enter a gentlemen’s club, of sorts, featuring sexy women and tarantulas. Automatically, we know we’re in for a pretty surreal ride.

It’s difficult to say much else about the story, since Enemy is a film that must be experienced to be believed, with Hitchcockian elements that have one foot firmly rooted in classic suspense, while others feel a bit more modern (Cronenberg and Lynch may come to mind). The film’s palette is a grimy yellow, which only unnerves us further. It’s not exactly a pretty movie, though it is a visually enticing one thanks to the clever camera work. The spooky score by Danny Bensi and Saunder Juriaans is top notch. And that ending!

Okay, yes, back to that. Enemy‘s final scene has already been a subject of much lively debate amongst the few who have seen it. It’s rather unforgettable, simultaneously ridiculous and terrifying, and it’s bound to leave just about anyone with more than one feeling about the finish of this film. It’s more than an M. Night Shyamalan-style “gotcha!” — it’s as if The Sixth Sense ended with the reveal that Bruce Willis was dead the whole time, and then he turned into a watermelon.

As you might expect, Enemy leaves many questions unanswered. (Most of them, actually.) Are Anthony and Adam twins separated at birth? Clones? Two halves of the same man’s psyche? It’s hard not to notice that they’re both involved with beautiful, icy blondes. Adam’s mother seems to know more than she lets on, especially when she insists that he likes blueberries when we know it’s Anthony who likes blueberries. (Paired with Noah, this is the second movie in a row I saw in which berries played a significant role.) Jake Gyllenhaal gives two compelling, contrasting performances, establishing him further as leading man material as he matures as an actor, and Sarah Gadon is equally compelling as Helen, who finds herself drawn to her husband’s bashful double. (Melanie Laurent’s Mary doesn’t have enough screen time to make too much of an impact.)

Obviously, Enemy is not for everyone… and certainly not for the deeply arachnophobic. Many will find it impenetrable. Some may find it just too preposterous. And it’s totally fair to think that the ending is just a big “fuck you!” to the audience. But I happen to enjoy this sort of puzzle-box movie, a film that may not ever be completely solvable.

Now, if you’ll excuse me, there’s a very delicious-looking housefly I intend to have for lunch. 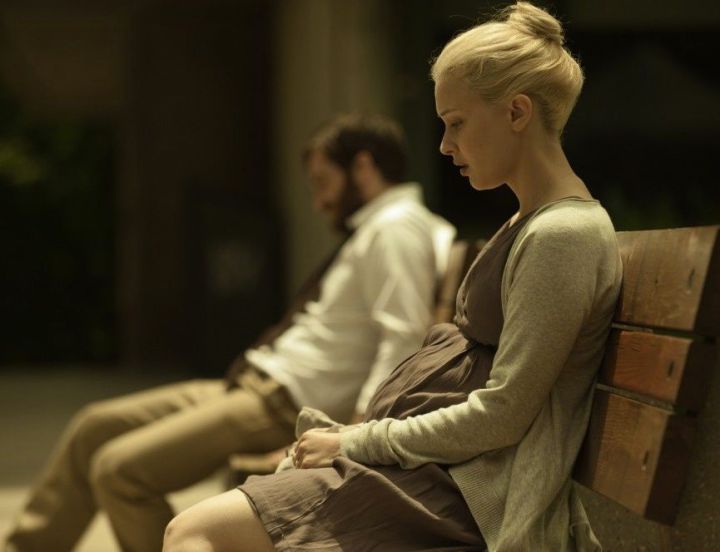