‘Tomorrow’ Bland: It’s A Small Film After All 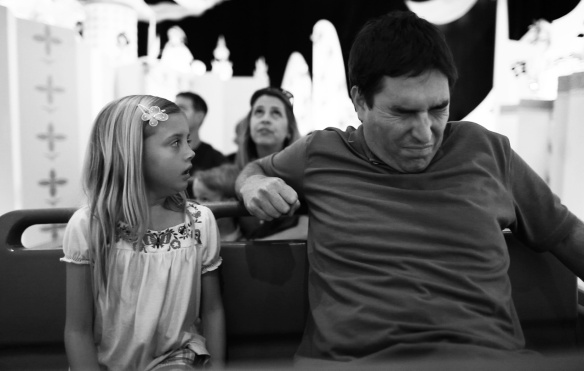 And then this happened.

I’m pretty sure what you’ll find at the very bottom of my “Best Of 2013” list, though, and that’s Escape From Tomorrow. Shot largely inside Disneyland and Disney World, the movie created some buzz at Sundance and has opened to astonishingly lukewarm reviews. (I say astonishing because, really, they should be so much worse.)

This will be a brief review, because I am angry. Escape From Tomorrow is “about” a nuclear family yukking it up at a Disney park. Father Jim may or may not be a pedophile, given his creepy obsession with two young French girls; mother Emily is absolutely a bitch. Their kids — one boy and one girl — are pretty typical. Jim gets fired from his job, starts lusting after French teenagers, occasionally (but sporadically) hallucinating on rides, and then begins lusting after just about anyone. He mauls his wife on a Winnie-the-Pooh ride and flirts with a mysterious woman. A lot more happens, but very little of it makes sense. At one point, we learn there’s a “cat flu” epidemic going around; someone turns out to be a robot, and someone else turns out to be a witch. You can imagine, perhaps, how these disparate elements might fit together in a satire of the Disney corporation and all its manufactured magic — but writer director Randy Moore, apparently, cannot.

The fact that the film was shot covertly in Disney theme parks is fascinating, but the story itself is a fucking mess. This is not just a bad screenplay but a tragedy of storytelling; like a dead body beaten and mangled so horribly that you can no longer even tell it’s human. That’s how much the Escape From Tomorrow screenplay resembles that of an actual movie. The filmmaking is flawed, the acting pretty amateurish, but neither of these are the movie’s undoing — in the hands of the right storyteller, they could be forgiven and perhaps even enhance the movie’s naughty, forbidden, don’t-tell-Walt aesthetic. But no. This is not a satire, because satire must be clever. Clearly a fair a amount of work went into the production of this film, but almost no thought went into it, on a story level. How could anyone who really thought about it produce this?

Does this story mean something to its writer/director? Probably. But there’s no consistency. There are at least three separate plot threads going on, none of which are well-explained, and none of which have anything to do with the other. Our protagonist is a horny, asshole cheater with a thing for stalking young girls, and yet we’re kind of supposed to root for him? Escape From Tomorrow could have been about the irony of fucked up adults taking their children for a magical experience in the “happiest place on Earth.” It could’ve been about the dichotomy between the money-grubbing Disney corporation and the carefree vibe of its parks. It could have used Disney tropes and iconography to tell a twisted, hallucinogenic adult-oritented tale with very un-Disney sex and violence. It does all of these, but only for a few minutes at a time, and none of them are done well.

Yes, Escape From Tomorrow has garnered some attention for its unusual production. But at its heart, it’s as amateur as any student film on every level. It’s a small film after all, and would best be shrugged off and ignored as such.