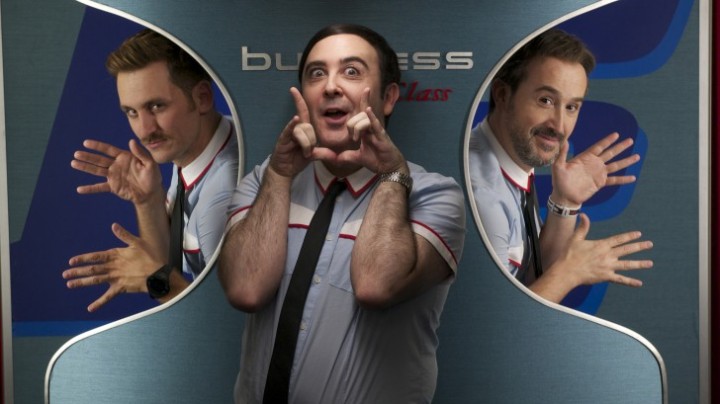 Pedro Almodovar is one of those filmmakers whose films I’ll see no matter what. The    melodrama, the bright colors, the frankness about sexuality — they tend to be a good time.

Ever since 2002’s Talk To Her, I’ve caught each of them in theaters, and all have been worthwhile. I haven’t yet explored his pre-All About My Mother collection of what I hear are lighter films, but with his more recent endeavors, he makes films like no one else. They all carry his very specific thematic and visual signatures.

His latest, I’m So Excited, does too, though it’s something of a departure for him from the dramas he’s made over the past fifteen years. His last film, The Skin I Live In, was a bit darker and more disturbing than anything I’d seen from him before, though Almodovar is certainly no stranger to troubling subject matter. He always veers between drama, suspense, and comedy nimbly, and The Skin I Live In did, too. After going slightly blacker than usual for his last outing, though, Almodovar must have wanted to swing in the other direction, because I’m So Excited is pure comedy — though still one that could only have been made by Pedro Almodovar. 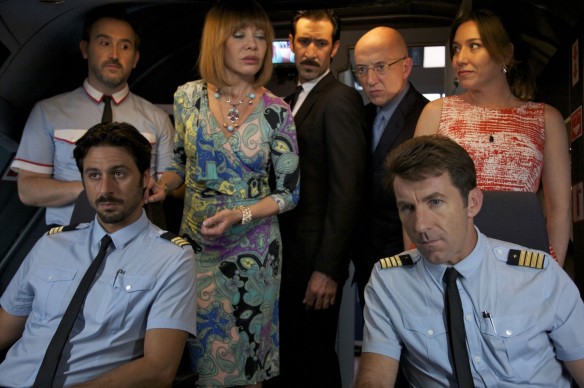 The plot is fairly absurd, even by Almodovar standards. A plane bound to Mexico experiences equipment failure and must instead make circles over Toledo, Spain, waiting for a runway to be cleared. This takes many hours, during which the small handful of business class passengers interact with the crew in some very surprising ways. (Where are the coach passengers? They’ve all been slipped muscle relaxants to put them to sleep, one of many wry jokes in the film.) Passengers include a psychic, a dominatrix, a famous actor, a pair of newlyweds, a hit man, and an unscrupulous businessman who is fleeing the country. Yes, these are exactly the types you’d expect to find in a film by Almodovar.

There’s also a trio of gay male stewards that “entertains” the passengers with a sing-along to the Pointer Sisters’ “I’m So Excited,” the best airplane musical number since A Very Brady Sequel. There is much discussion of the sexuality of the two pilots — well, just about everybody’s sexuality, because this is Almodovar. As in most or all of his films, characters occasionally launch into long monologues explaining their backstory (or someone else’s), and the film goes off on one tangent off the airplane that isn’t particularly relevant to the main story, as Almodovar likes to do. Fans of his will be well-familiar with such tropes by now and aren’t likely to find them as jarring as they might be in a film by anyone else.

And don’t expect a light comedy by Almodovar to be any less sex-drenched than his other films. As in many Almodovar films, human sexuality is rather fluid and there’s an emphasis on oral sex (and other kinds, too — including not one but two pseudo-rapes). The stewards decide to drug the passengers with mescaline in order to get them to “relax,” which basically has just about everyone on board shamelessly enrolling in the mile-high club. Yet there’s just enough attention paid to each character to keep this film grounded despite the more ridiculous elements — there is a little sentiment amidst the froth.

I’m So Excited is definitely a lark. It’s a minor film, and intended as one. It’s also possibly Almodovar’s gayest film, and that’s really saying something. Penelope Cruz and Antonio Banderas pop up for brief cameos in the opening scene, but mostly the players are lesser-known Almodovar vets (and some newbies), all of them appealing, and many of them easy on the eyes.

Is I’m So Excited worth getting so excited about? Not exactly. It is empathetic toward its characters, and yet it’s hard to take very much of this seriously. Almodovar’s other stories have much higher stakes and larger canvases; this is almost entirely bound to the front end of a single airplane, and even if the stakes are life or death, few of the passengers or the crew members are truly taking that to heart. I’m So Excited is funny, sexy, and totally absurd, which means it isn’t such a far cry from Almodovar’s other recent films at all.