The Oscars are coming!

The Oscars are coming!

Okay, yes, I know, the Academy Awards are not technically until February, and that was a Revolutionary War reference, which is inappropriate for a movie set during the Civil War. But the movies that will be nominated are on their way in hordes, starting this month with the strong contender The Master, directed by Paul Thomas Anderson, who led one Daniel Day-Lewis to the podium with his last film, 2007’s There Will Be Blood.

I like The Master‘s chances at a slew of nominations come January, but if there’s one movie this fall that just screams “Oscar bait!”, it’s this one — Steven Spielberg’s Lincoln, starring Daniel Day-Lewis as the man you know from such gigs as “the penny” and “the five-dollar bill,” and also possibly something about slavery.

Lincoln looks like a remake of War Horse, starring Daniel Day-Lewis as the horse. (Come to think of it, I’m not certain that the horse wasn’t also played by Daniel Day-Lewis in that film.) It’s got that epic sweep, a very well-known historical figure at its center, a wartime setting. There is absolutely no higher pedigree of filmmaking possible than the combination of Abraham Lincoln, Steven Spielberg, and Daniel Day-Lewis. But the film co-stars Tommy Lee Jones, Joseph Gordon-Levitt, Jackie Earle Haley — basically, only people with three names are allowed to be in a film this important — as well as Sally Field and every other serious actor you’ve ever heard of. Of course, Spielberg’s past historical epics have been hit (Schindler’s List) or miss (Amistad). Expectations for Lincoln are both sky-high and also, rather cynically, that it will be a bloated Oscar-grab that can’t possibly live up to the hype.

Based on this trailer, yes, this does look like a Very Serious Movie. Seeing Daniel Day-Lewis all gussied up as Abraham Lincoln is both awe-inspiring and super creepy. They may as well hand out the Best Makeup Oscar to Lincoln now, regardless of whether or not the film itself is any good.

Honest Abe is having a surprisingly big year at the cineplex, having also supposely offed a bunch of undead creatures in Abraham Lincoln: Vampire Hunter. Somehow, I think it’ll be Spielberg’s film that racks up more nominations, however.

As someone who grew up captivated by Spielberg, I always give ol’ Stevie the benefit of the doubt, because he’s made more good films than bad ones. I even liked War Horse pretty well, though I hope Lincoln is better. Like, Oscar-good. And almost Best Picture-good, but not so good that it beats The Master. Because dude deserves a turn at the podium already, right alongside Daniel Day-Lewis, who basically just has to sit there in this awesome makeup and do nothing if he wants another Oscar. (But most likely will do plenty more.)

I cannot tell a lie — this looks pretty damn good.

(Damn, that was a George Washington reference, wasn’t it?) 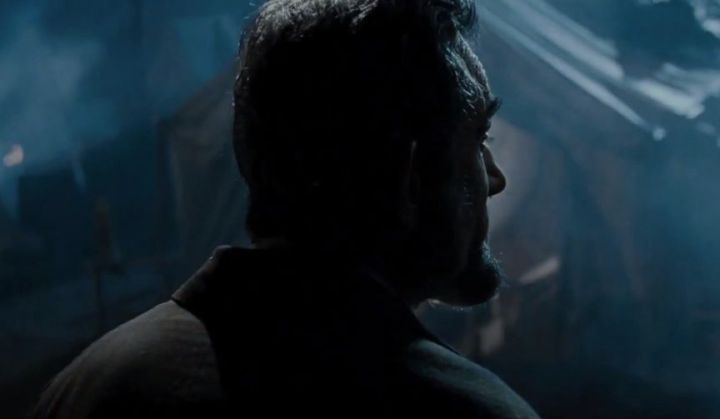