Back To School: Ingmar Bergman // ‘Persona’

Inspired in part by the ballyhoo over the BFI Sight & Sound poll, I have decided to revisit the works of some of the greatest filmmakers who ever lived. We’re talking the real heavy-hitters — your Bergmans, your Fellinis, your Renoirs, your Kurosawas. Many of these directors, I met back in film school — or the summer just before, when I took on a list of 100 influential movies (and watched about half of them). I confess, I actively disliked two of the BFI’s Top 10, and slept through the majority of one more. So the BFI’s tastes are, not surprisingly, not perfectly matched up with my own, but the list did remind me of a lot of auteurs I’ve paid too little attention to since leaving USC. Thus, a random sampling of their films (not necessarily all lauded by the BFI) is in order.

Since volumes have been written on these works already, my goal isn’t to say anything particularly profound or noteworthy, or go into a deep analysis. They will only be brief reactions about what it’s like to view these films now, in (post-)modern times. Do they hold up? Are they still relevant? Are they still entertaining?

Ingmar Bergman is the austere Swedish director best known for The Seventh Seal — that oft-parodied playing-chess-with-death movie. I’m much less familiar with his work than I probably should be, having seen only The Seventh Seal, perhaps because Bergman strikes me as a very serious filmmaker, the kind of man whose movies are seldom described as “light romps.” Not that I’m overly fond of light romps myself, but when you settle in to watch a Bergman film, you can’t help but be aware of the heavy-handed import of it, a self-conscious tone and style that is very “of its time.” 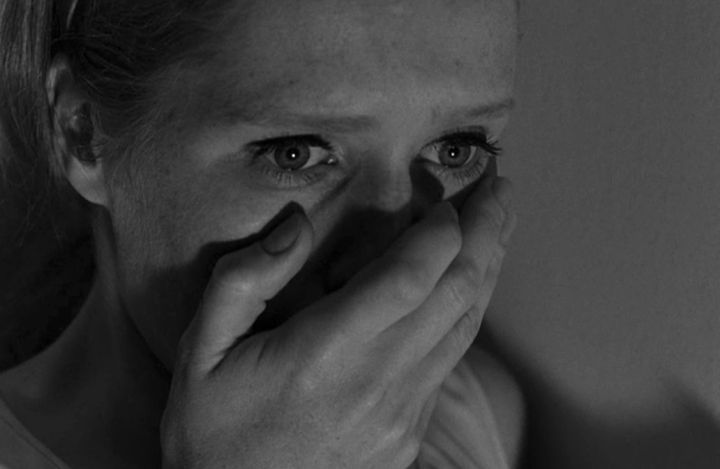 Persona begins with a showy collection of unpleasant images, including a sheep being slaughtered and a nail driven through a man’s palm. (Biblical? Maybe.) From there, it is the story of a nurse named Alma (Bibi Andersson), tasked with taking care of Elisabet, an actress suffering a nervous breakdown, who has decided to go mute. The doctor tending to Elisabet decides the best treatment is for Alma to take Elisabet to her summer home for some relaxation on the beach. Now, I’m not sure if this is how mental anguishes were generally cured in 1960’s Sweden, or if this is supposed to be a rather unconventional treatment, but no one seems to find it odd in the story.

Elisabet carries on with her muteness at the summer home, which at first works out just fine for Alma. So used to taking care of others for a living, Alma finds herself babbling incessantly and sharing all kinds of secrets she’s never told anyone, while Elisabet merely smiles in response. Alma is able to project whatever she wants onto Elisabet, who she respects as an artist and actress, and maybe feels like she “knows” as a public figure the way we often assume we know celebrities. But it turns out she doesn’t. A letter reveals that Alma has misread Elisabet’s silence, and soon the nurse becomes the one in need of a cooling off period. She begins to resent her charge’s refusal to speak, and things go downhill from there (including a catfight or two). Persona also contains some surprisingly graphic sexual dialogue, which maybe shouldn’t be so shocking for a European film of the 60’s, in retrospect. But still.

The films I was most reminded of were David Lynch’s Mulholland Drive and Anthony Minghella’s The Talented Mr. Ripley. Persona has some fairly direct lesbian subtext (both of those films also deal with homosexual relationships), in the cinematic tradition of friendships that are a little too close to be just friendship. Much like Tom Ripley, Alma is a working-class girl who finds herself admiring and then assuming the life of a more glamorous person who betrays their imagined intimacy. Mulholland Drive references Persona more directly, particularly with the strange, dream-like tone and the focus on an actress. The film’s ending is particularly surreal, and open to interpretation, with the women coming across more as two halves of the same identity rather than distinct individuals.

Perhaps the best scene, though, comes in the middle, just after Alma’s adoration of Elisabet begins to sour. She, too, becomes mute for a moment when she fails to warn her friend that there’s a piece of broken glass on the ground just begging to be stepped on. The surreal stuff is well and good, but the most enduring aspects of Persona are the more realistic dramatic moments between these women. Both actresses turn in pretty stellar (though very different) performances.

So does it hold up in 2012? More or less. Your average, modern-day film fan perusing streaming titles on Netflix may not dig Persona, but as a piece of film history, it’s a captivating watch. Persona has clearly influenced a number of films that followed it, and at a breezy hour-and-a-half running time, it’s a relatively light foray into the Bergman oeuvre (compared to The Seventh Seal, at least).